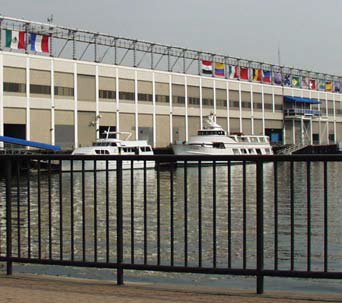 Commonwealth Pier, one of the largest of its time, was at the heart of the vibrant Boston Harbor trading community around the turn of the century. By the early 1970’s it was in serious disrepair. Extensive renovations began in 1975, the timber- pile-supported pier had to be stabilized using cellular concrete. The entire façade was clad with EIFS. The name was then changed to the World Trade Center, and the structure began a new life as an 800,000 square foot premier conference, exhibition center and office complex. By 1999, after two decades of harsh New England winters the façade was again showing signs of distress. Edwards & Kelcey were retained by the owners to evaluate the structure and developed a repair strategy to extend the functional life and update the appearance. There was significant damage to the exterior cladding and water entry had become a serious concern. The engineer, contractor and Conproco worked together to develop and implement a repair/protection program that is still performing without flaws.