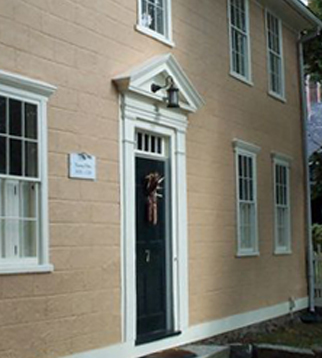 The Thomas Pellet House, located in Monument Square, is one of the oldest homes in Massachusetts. The oldest part of the house is the rear ell, built by Thomas Pellet, which dates from the 1670s. The main part of the home was built in 1728 by Benjamin Barrett. The home’s most important architectural feature is the imitation stone, stuccoed façade, which is attributed to Barrett. The limestone and horsehair based stucco was applied to a wooden lathe and then scored to look like stone blocks. Approximately 80% of the stucco, and 100% of the original lathe, remains intact today. Since invasive treatment of the existing substrate was not an option, consolidants were used. Conpro Start was used to strengthen the existing stucco. Conpro Point 5 was used to increase adhesion to the existing paint, which could not be removed for fear of damaging the stucco. Conpro Lastic was used as a protective coating.